The inventor of the Magic Fingers Vibrating Bed, John Houghtaling, died last week at the age of 92. Houghtaling patented his invention in 1962 (US 3,035,572), and founded Magic Fingers, Inc. to commercialize it. His company installed millions of units in hotel and motel rooms across America in the 1960s and 70s.

Houghtaling wasn’t the first inventor to conceive of a mechanical device to relieve weary or weak muscles. In 1869, Allen L. Wood of New York City, patented an “apparatus for treating diseases” (US 97,944) that consisted “of certain mechanisms, whereby circular or rotary motion… is made to perform several operations of rubbing, kneading, and giving vibratory and other action to muscles and various parts of the system.” Wood’s device (see below) looks more like a medieval torture rack designed to extract confessions than heal the sick. 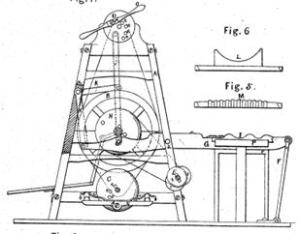 This entry was posted in Houghtaling, inventors, Magic Fingers. Bookmark the permalink.