Posted on November 4, 2007 by mjwhitekingston 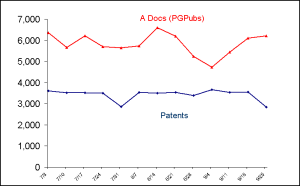 In related news, GlaxoSmith filed a last-minute suite in federal court to prevent the USPTO from implementing its new patent rules which, among other things, limit the number of continuation applications an applicant may file. The USPTO hopes the new rules will reduce the number of applications.

This entry was posted in Patent statistics. Bookmark the permalink.